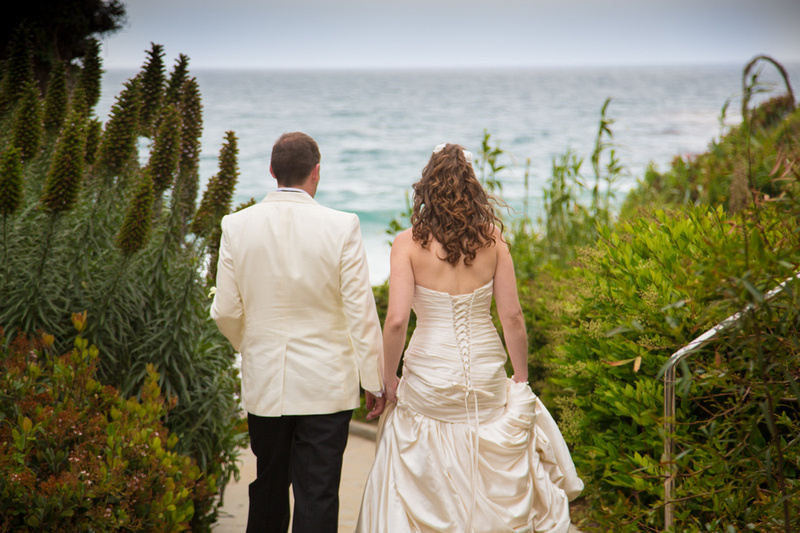 Growing up in Chicago you learn quickly in the city that you tend to put up a barrier so others don't take advantage of you. When you're surrounded by palm trees ocean breezes and beautiful surroundings you tend to let down your guard and just enjoy yourself.

In Laguna Beach the majority of people are laid-back and not all Agro. However there are exceptions to the rule when planning a (. Tip of the day for those out there planning a beach ceremony (how romantic is that)? The thing is you don't own the beach, the beaches are open to everyone. That's a good thing but when your saying you nuptials the last thing you want is to have a homeless guy about two feet away from your face screaming, "KISS HER!!! - KISS HER… KIIIISSSSS HER!!", and that's exactly what happened at a Laguna Beach wedding ceremony I was photographing. Yeah, an uninvited guest emerged from the bushes just as the ceremony began and eventually he made his way down to the beach and stood about two feet from the bride and groom just over the shoulder of the officiant. Shirtless, screaming, high and drunk.

I know what you're thinking… So how was the situation handled? The officiant was a rather tall man and he had quite a range is vocal chords. He turned to the drunk fool and in a calm very deep very stern voice with bulging eyes slowly and with out any doubt told the drunk: "go, you will go now". It was like the fear of God was installed into the intruder, he started shaking and slowly walked away backwards.

The hotel wedding coordinator quickly arrived on the scene and informed the homeless man that the police have been called and that he better get as far away from this wedding as possible. He took off running.

Here's where an off-duty officer really could've come in handy. Since the beach is public an off duty police officer who can diffuse situations like this and keep bothersome drunk and unruly  people from creating really awkward and uncomfortable moment. It is after all, your WEDDING CEREMONY!

Sure, it's a rare and a extreme story… it's just a side note in the memory of the wedding but I think you would agree if it hadn't happened it would definitely have been better. Guess what? There's more. While we were shooting wedding photographs up near the hotel on the sidewalk, as the Bride was posing for a picture she was partially, blocking a portion of the sidewalk. Sort of bottle-necking the sidewalk. An extremely rude woman and man began verbally accosting the bride. Quite a few F bombs were dropped as this trashy duo passed by and told her she had no right to block their path and that she was a F'n … whore. Pretty extreme behavior from Walmart clothed tourists and the homeless guy, but still, two incidents in one day.
When you're in a public area with a lot of tourists, not everybody plays so nice all the time. Alcohol and controlled substances are often the culprit. Lesson learned? The good investment is somebody to watch your back. It's sad to think that you may need to hire security at your wedding.
I recommend to every couple that is planning a beach wedding to consider security.
Keywords: Laguna Beach wedding, WEDDING CEREMONY, security at your wedding